Introduced in December 2014, the HP Superdome X server provides high performance, expandable up to 16 sockets, and 12TB of memory capacity to support computational, memory intensive application systems. big. It combines the advantages of the x86 architecture with technology for critical systems only to provide one x86 Linux server with uninterrupted capabilities for all critical applications.

The scaling factor (the percentage of resources available when the system expands) is almost linear. For example, when expanding from 8 to 16 sockets the expansion factor is 1.89 (a system with 16 sockets will handle up to 1.89 times more jOPS than a 8 socket system). Memory consists of 384 DIMMs (48 DDR3 DIMMs per blade server) with a combined capacity of 12TB. Memory capacity per blade server is 1,536 GB (48 x 32GB / DIMM).

I / O is provided via the 16 FlexLOMs, which are LAN cards located on daughter cards, providing flexibility in choosing between two 10GbE dual ports on a single chip or 24 mezzanine I / O cards. Superdome X Server runs standard versions of the SUSE Linux Enterprise Server operating system as well as Red Hat Enterprise Linux developed in conjunction with SUSE and Red Hat. 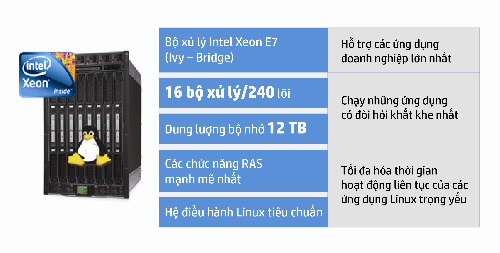 HP Superdome X is for the critical environment.

Each HP nPartition has its own CPU, memory and I / O, which can be removed and added to another partition through management software without physical intervention, unless additionally required. a new blade server.

A Superdome server cabinet can be installed with a certain amount, such as 6 HP nPars. The first three partitions can be reserved for critical applications, suitable for development, test, and production environments. HP nPars fourth can contain several resource-managed partitions with stacked applications such as databases, running on a single operating system. The fifth HP nPar can run KVM virtualization software, supporting certain VMs, where each VM runs its own operating system and application on shared resources. The sixth unit can run virtualization software (hypervisor) with the ability to support multiple VMs with many different operating systems.

HP nPars technology has many advantages, from cost of ownership (TCO), capacity is easily expanded by adding a blade server ... In terms of efficient use of resources, capacity to install and manage multiple electrically segregated environments in the same cabinet gives the IT department a high degree of freedom to fully exploit the capabilities of the system. Business continuity, with virtually no interruptions under a routine maintenance schedule because the partitions can be repaired independently without affecting each other.

System availability is claimed by HP at over 99%, most accurately described as a pyramid, starting at the bottom with the infrastructure, in which the system components, firmware, network failure and HP nPars are both designed to ensure reliability and can be optimized and repaired while the system is running.

Blade servers and cabinets both have redundancy and protective switches integrated for critical components. For example, HP has partnered with Intel to take full advantage of Intel Xeon E7 v2 processor's RAS features, including optimizing inter-processor crash recovery. , operating system and applications. HP also develops its own firmware, maintaining comprehensive control over the software code and how it controls the hardware to ensure the system can cope with any problem before it affects the next tier. is the operating system.

The HP Integrity Superdome X server sets a new standard in the performance, availability, scalability, and performance of x86 server systems, making it the ideal platform for mission-critical applications.

Environments that can benefit from a Superdome X server include large databases, critical OLTP, customers using Oracle or SAP solutions, running Unix for critical applications, changing the model from scale out ( develop by adding servers) to scale up (growing by adding resources to existing servers), SAP HANA or want to replace an existing x86 system with a larger and more flexible Linux system.